ike many college students that I teach today, when I was in college, not only was I a full-time student, but I also had two jobs. I worked as a secretary in the German department (I majored in English and German), but I also worked as a hostess and cashier at my friend’s parents’ Chinese restaurant–The Pagoda, where I received an education of a totally different sort, but equally as important, to me anyway.

The Pagoda was a truly American Chinese restaurant, built and owned for years by a Chinese-American family, then, after it was already an established and popular eatery, bought by my friend’s father, a Puerto Rican-American,.  The chefs were from Hong Kong primarily; the fry cooks, bussers, and dishwashers were mostly Puerto Rican. Some of them spoke English, but many of them did not. Then there was the wait staff, which included a myriad of varying ethnicities, including Japanese, Laotian, Vietnamese, Cambodians, Oklahomans,  and me–a little bitty, painfully shy girl from Alabama.

It was quite a place! Who would have thought, at a Chinese restaurant in the heart of Tulsa, Oklahoma, that I would have tasted such a rich variety of cultures and traditions but always with a distinctly American flavor? This true melting pot extended to the menu, where patrons could feast on traditional dishes like Moo Goo Gai Pan or Chicken Chop Suey, more Americanized fare like Garlic Chicken (garlic-flavored fried chicken) or Steak Kew (thick chunks of sirloin stir-fried with Chinese vegetables in a savory sauce), or all-out All-American eats, including hamburgers, French fries, and Chicken-Fried Steak with White Gravy. (One customer regularly came all the way from Fort Smith for that dish.)

When I first started working at Pagoda, I was so shy, so naive. My parents had moved us to Tulsa when I was still in high school–I graduated from Jenks High School in Jenks, Oklahoma–but I stayed in college at Oral Roberts University, living at home for my first three years in college. Then, about the time I started working at Pagoda, my parents moved back to Alabama, and I moved into the dormitory.

Before that time, I had relied mainly on my family members, my best friend, and her boyfriend for companionship, but now my family was gone, my best friend had moved to a college out of town, and her boyfriend worked a great deal, and I did too, especially at Pagoda.  But my bosses and fellow workers reached out to me, engaged me, joked with me, even protected me, as if they knew I was lost and lonely in a world where I didn’t always fit in. 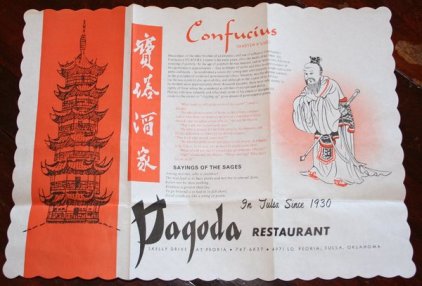 Oh, so many memories of that time–

I especially remember sitting down for special meals during holidays and other special occasions, especially Thanksgiving. Everyone celebrated it–all races, nationalities, and creeds. At Pagoda, Thanksgiving meals became times for friendly competition between the two major groups of cooking employees, so when the restaurant would close before Thanksgiving Day, we would have a spread, all the traditional fixin’s with a spicy twist, including two turkeys–one was cooked in a Chinese style, brined with the skin crisped on the outside and the other one in a spicy Puerto Rican style with adobo spices and oregano. (I’m guessing based on what I know now–I only knew the food was delicious back then.)

Both groups would try to get all of the diners, myself included, to declare their favorite, but I never did. I just smiled, laughed, said I had to get another helping before I could be any judge, and headed back to the table for seconds or thirds. I always tried to find my way back in a corner. I was young. I was shy. I didn’t speak their languages, but I ate their perfectly spiced food, watched them, listened, laughed when they did, and longed to understand them more.

Thus was born one of the key tenants of my educational philosophy.  So I tell my students–get out of the classroom. Put yourself in new and uncomfortable situations and listen for that song you’ve never heard before. Go into every situation with a mind open to learning about things and food and cultures and people you never dreamed you would. If you want to truly, deeply learn—then go out and live.