In light of recent events, I have been thinking a lot about Pittsburgh. This weekend at the North Carolina Writers’ Network’s fall conference in Charlotte, I was inspired to write the following after a great panel on the importance of place in writing:

When I moved to Beaver, PA, in 1983, I was 23, just graduated from Oral Roberts University, Lord help me, and had come to work at a small Christian school outside of Pittsburgh. I grew up an army brat, who moved from place to place north, south, east, west, yet always carried the South with me as I traveled with my loud, boisterous, loving Alabama family.

Part of my heritage is a powerful streak of non-conformity, independent even from the strong political, religious, and social mores of southern society. So when I was still jobless a couple of weeks before graduation and was invited to apply for a job teaching English and German at Rhema Christian School in Aliquippa, PA, a major steel town outside of Pittsburgh, I didn’t hesitate. It was a grand adventure, moving to a brand new place to explore and new people to meet.

The first thing that struck me when I arrived that June day and was picked up at the Pittsburgh airport was how dang humid and hot it was. Despite that similarity with my home state, on the way to the school from the airport, I knew I wasn’t in AL anymore. The rolling hills were larger than those of the Alabama plains. Instead of one story brick or wooden houses, spacious lawns and pecatrees, we passed two story homes huddled close together in the valley and scattered over the hills, big red barns decorated with brightly colored quilt patterns I know now are PA Dutch Hex signs, long rambling steel mills belching smoke, and the bridges! Silver train bridges beside the huge arches of yellow ones crowded with cars and trucks, moving in and out of small bedroom

On the way to the school after leaving the interstate, we passed a Perkins Restaurant, a chain, I was told, much like, but not at all like, Shoney’s in the South. On the marquee I read that the week’s special was City Chicken—city chicken? I thought it was weird but let it go as my nerves took over in anticipation of my first teaching job interview.

I got the job and moved two months later. Almost my whole family helped me move. We had fun exploring Pittsburgh—the drive through the Fort Pitt tunnel. 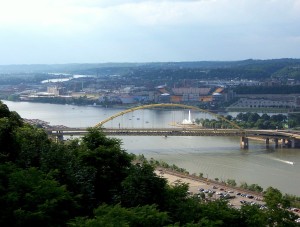 opening up to its impressive view of the city during the beginning of its renaissance, lunch at an Italian place, claiming the best pizza in The Burgh, beautiful Point State Park, right where two rivers came together to form the mighty Ohio. Then, hugs, kisses, tears, and they were gone, back to Al together. I was left alone with a map and my dad’s advice on the best route back to my new home.

After crossing four or five bridges and traveling down numerous wrong roads, I finally found the right one and headed to Beaver. It was getting late, I was already homesick, frustrated that I had lost my way, and therefore powerfully hungry, when I saw a marquee in front of yet another Perkins restaurant, or maybe it was Eat ‘n Park, anyway, the special, according to the sign, was city chicken. 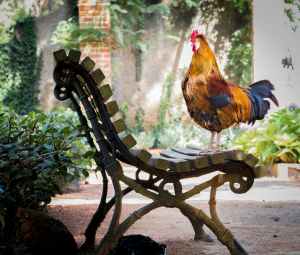 Photo by Yves Chaput on Pexels.com

I took the bait, parked, was led to a booth, and without thinking or asking or reading the menu, ordered the special from my young, perky, big-haired server.

She wrinkled her nose. “Did you say City Chicken?” Not the first time that day someone had trouble with my accent

She gave me a curious look but said nothing. A few minutes later she placed before me a huge plate of meat on a big pile of fluffy white rice with a side order of broccoli. I took a whiff and was suddenly transported back to my grandmother’s kitchen as she prepared fried chicken and rice for a Wednesday night church supper before prayer meeting.

My mouth watering, I took a bite. Oh, my, it wasn’t  chicken at all. City chicken, turns out, is big fat juicy, deep fried pieces of pork tenderloin on a frickin’ stick. It was not like anything I had ever tasted before. But, man, I thought, feeling I had not, after all, made the biggest mistake in my life, it sure was tasty.