This summer continues to be a time of renewal for my spirit, but it hasn’t been easy. My reading adventures, working on this crazy satirical novel , and being alone so much have led me to confront many uncomfortable realities about myself–I have lacked resilience and settled for mediocrity much of my life. I’m often petty, self-absorbed and self-righteous, easily angered, hypocritical, thoughtless, vain, jealous, etc., etc.

Oh, don’t worry, I continue to love myself. That’s kind of the problem. I think of myself more highly than I ought, methinks.

Many of the books I’ve chosen to read this summer have helped me to see some of my many weaknesses, and also, thankfully, validated some of my strengths. As always, the two are inextricably bound to one another. But the book I just finished has not only convicted but also bolstered my spirit and renewed my resolve.

The book is Real Christianity, a paraphrase (by Bob Beltz) of William Wilberforce’s A Practical view of the prevailing religious system of Professed Christians, in the higher and middle classes in this country, contrasted with real Christianity written in 1797. The title alone explains why I read the paraphrase, but someday I will read the original.

William Wilberforce was an abolitionist and member of parliament who helped to end slavery in England. His book, however, never explicitly mentions the battle to abolish slavery, and it addresses, as the original title suggests, the middle and upper classes of the British Empire.

But it didn’t take long at all for me to see myself and my country in the pages of this modern paraphrase, written in 2006 by the man who was one of the producers of the very good biopic Amazing Grace, that tells the story of Wilberforce’s twenty-year fight. More about the movie later.

For example, here is a quote from early in the book:

“We must remember that almost any ideology can be distorted and misused to bring misery to multitudes or justification to the most bizarre behavior. Nothing is more dangerous. That which is intended to motivate goodness and restrain evil actually can become the instrument of that which it intended to restrain. History is full of examples of how virtues such as liberty or patriotism become twisted when separated from a healthy and authentic faith. Twisted men in every generation and occupation have twisted whatever they must twist to get what they want. Why should we expect that some within the Church would not be guilty of the same actions?” (46).

Wow! See what I mean? And it was written in the 18th Century! Wilberforce himself struggled with the same issues he writes about. He is remembered for being a force for good, for valid reasons, but, of course, he struggled and failed miserably at times, especially in allowing slave labor, thinly veiled by the concept of “apprentices,” to continue in the abolitionist colony of Sierra Leone. See this interesting article on the subject in The Guardian.

See what I mean? Conviction and renewal. Convicted by Wilberforce’s words and renewed by the knowledge that his failure was, and mine is, inevitable. Renewed? How does being reminded of failure possibly revive my soul? Another paradox of my faith, I suppose. I see that the answer is not abandoning my faith or ceasing to struggle to do good, but knowing that I can ask for and WILL receive forgiveness, I can continue striving to do some good in the world.

Not a bad lesson to pass on to my students, is it?

“Money and ambition have become idols in our time, especially for individuals in the business and professional worlds. Disguised as common business practice, these forces are allowed to gather great momentum in our lives. Arguments about being diligent at what we do, becoming successful in our profession or providing for our families seduce us so that we no longer have a clear sense of judgment about these issues. Our work consumes us” (73).

It is important to keep in mind that he is addressing Christians here, not people who do not claim to be believers. Knowing that, these words strike me to the core. I have let my work consume me. I have become as data-driven as the rest of the world. What is my retention rate? How many students passed that essay with a C or better? Let me check how many hours I spent working on the LMS. Look at those FTE’s, will you?

I am convicted, but I am renewed because, since March, I have been working from home, so thankful that I have been forced to concentrate my efforts on the people who need me–my family, my friends, and, my students.

If you want to know more about Wilberforce and the battle to end slavery in the British Empire, I highly recommend the film Amazing Grace. Strong performances, especially Benedict Cumberbatch as England’s youngest ever prime minister, William Pitt the Younger, who was a great friend of Wilberforce’s.

I did not eat the black pudding or baked beans’

I’m a day late posting because it was such a big day yesterday. We started off having a traditional English breakfast, just a bit modernized to be healthier. I had bacon, more like smoked ham, with veggie sausage, a poached egg, cooked tomatoes, mushrooms and a pastry. Yum!

Next was a solo trip to Trafalger Square and the fabulous National Gallery of Art where I saw artwork by Titian, Rembrandt, Michelangelo, DaVinci–the British masters, like Turner, Gainsbourgh, Stubbs–and my favorites–the Impressionists–Manet, Monet, Renoir, Degas and Van Gogh. One of my favorites was Van Gogh’s Sunflowers. I also liked Geoge Stubbs famous horse paintings. One of my favorite paintings was by an artist I did’t know of a tall, thin knight who had a wounded foot and knee, so he couldn’t fight anymore. Just the look on his face and all the details. It was magnificent.

I saw too much to write it all here, but the eras that the gallery spans makes this a great place to visit for just about any book in the English canon that my students might want to make the subject of their travel project. And entrance is free! After I wandered the halls with my trusty audio guide (very helpful and easy to use–only a few pounds), I went down to the gallery cafe and had a pastry pie, a traditional favorite. Then bought a few gifts in the gallery store.Then I wandered around the square a little while, taking in all the sights. I especially enjoyed the musicians playing in the squares and the character actors–Yoda, the wicked witch and tin man.

After I made my way back on the Underground, we rested a while, and it was off for the big night! We took a cab to the Barbican, which is a modern entertainment complex, away from the main theater district. Our seats were fantastic, about five rows back.

When the curtain came up, there was Benedict Cumberbatch, right in front of us, and he was strong the whole way through. The whole cast was good, but my favorites,other than Cumberbatch, were Horatio, Ophelia, and Polonius. The gravedigger always brings some needed comic relief. 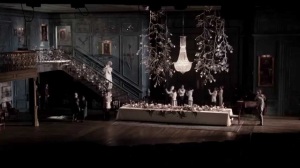 Stage early in the first act

The staging was also fantastic. Everything was stylistic, ranging from Victorian Era through the 60’s. The main set was like an Old Victorian Mansion that continued to decline during the first act. At the end of the third act when Hamlet is banished and Cladius is alone on stage, all this sooty material blows through the doors. When the second act begins, there are just piles of rubble allover. It was impressive–one of the best night’s at the theater. I’ve ever had.