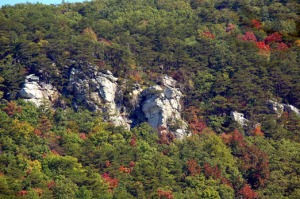 View of Mt. Cheaha near my grandmother’s birthplace in northeast Alabama

My grandmother, my mother’s mother, and one of my namesakes (I was named after my two grandmothers) was a teacher. We called her Mama K. She came from the mountains of Alabama, up near Chattanooga, that’s the tail end of the Appalachian range. It’s beautiful up there. If you ever visit, be sure you go to Mt. Cheaha, the highest point in Alabama.

My grandmother met my grandfather, also a teacher and a principal, at what was then called Jacksonville State Teachers College. Back then, the late 1920’s, a person could complete a teaching degree in just two years. They met in a music appreciation class. He was funny and boisterous, she was proper and reserved. He had grown up near Budston in Chambers County, Alabama, still one of the poorest counties in the nation, and she had grown up in the mountains, also surrounded by poverty, but their families, mostly farmers, managed to give their children good beginnings–childhoods filled with love, security and faith–teaching them self-sufficiency and discipline, but they wanted more for their kids than the hard scrabble life they had, so they managed to find a way to send them to the teachers college, where they could hopefully rise out of the poverty in which they were born.

All but one of my grandmother’s siblings became educators. Uncle John Taylor was principal of a school in Rome, Georgia for years. I didn’t know him well, but I went to his funeral with my mother, and I’ll never forget how packed that church was, how well-respected and loved Uncle John Taylor was.

My Aunt Jane, the baby of the family, completed all the course work for a doctorate in mathematics but didn’t see the need to write a dissertation as she was happy teaching algebra, calculus and trigonometry to high school students, mainly in Valley, Alabama, in the east-central part of the state near the Alabama/Georgia line. My daughter’s middle name is Jane in honor of my great Aunt Jane, who never married and had no children of her own. Her niece, my mother, became a teacher and high school librarian.  I, the grandniece, am a teacher too, having taught English composition and literature over 25 years in private at public schools, at the secondary and college level.

Aunt Dixie, the middle daughter,  also obtained a teaching certificate and maybe taught a year or two, but she went to revival services at the little County Line Baptist Church and fell in love with the handsome young preacher who was preaching that day, my Uncle Judson, and married him. His son, also Judson, became a teacher and principal in the Birmingham, Alabama area, now retired as Dr. Judson L. Jones. His daughter Lea is also a teacher and working on her doctorate in education.

Uncle Jim went into the navy and served his country honorably, becoming a farmer near Troy, Alabama, carrying on his parents’ profession, but it’s interesting to note that his daughter and granddaughter became educators, highly respected in their fields.

When Mama K graduated from Jacksonville State Teachers College, her first teaching position was in North Alabama in a one-room schoolhouse. I remember going through some of Mama K’s old school books from those days when I was a child. It was one of my favorite past times. I loved old books and still love them to this day, the way they smell and feel and look. In between the pages of one of the old textbooks was a little pamphlet about Harry the Hookworm, illustrated with funny little cartoon pictures of a hookworm and explaining how to avoid getting the parasites by using a latrine. The latter part of the pamphlet actually had instructions on how to build an outhouse.

I asked Mama K about it, and she told me this story. Once when she was teaching in that little schoolhouse in North Alabama, there was one little boy who was very poor and usually came to school wearing the same clothes, but she didn’t think anything of it because his clothes, despite being worn, always looked clean, but one day every time he came close to her, she noticed a horrible smell, a body odor that got worse in the next few days, especially now that it was getting colder, and she was keeping the windows and doors of the little schoolhouse closed.

Finally, the smell got so bad that she simply had to say something, so she kept him after school and asked as gently as she could, “Are you taking a bath from time to time?”

“Are you taking off your shirt and your pants and getting into a tub?”

“Yes’m. My mama heats up the water on the stove and I get in.”

“Do you scrub all over?”

My grandmother didn’t want to embarrass the boy any more than she already had, but she wanted to find out what was causing the smell and she had her suspicions, so she said, “Are you taking off all your clothes, including your underwear?”

He looked surprised at the question, and said, “Why, no ma’am. My mama done sewed me into my underwear!”

She chuckled and I laughed, after she explained it to me as I didn’t have much knowledge of long johns, and then she got serious, telling me that when she taught at the little one-room schoolhouse, a large portion of her teaching was about how to live a healthy life day to day when you were poor and didn’t have much of anything. She talked about how poor her students were and that many of them didn’t have houses with running water or latrines. They didn’t know many of the basic things, so she taught those along with reading and writing and arithmetic. She felt good about the short time she taught those students because she believed she was helping them have better lives.

My grandmother wasn’t sure how the boy resolved his problem, but he never came to school again smelling bad and everyone, including his fellow students I’m sure, were happy about it.

I look back at that story today, as a teacher myself, and am heartened. Sometimes what I have to say is difficult to say and hard for some people to hear. It is embarrassing and uncomfortable. It sometimes leads to confrontations, but if something is wrong at my institution, if something smells bad, then it is my duty as a leader in my classroom and at the college to find the cause of that stink and start scrubbing.

I learned how to seek and scrub partly from my grandmother–Margaret Katherine Dabbs, a brave and honorable woman–and I am thankful for the good beginnings she brought to my life, especially my teaching life. I hope I can be her namesake in more ways than one.

Next up–A story about Mama K during the time of school desegregation in Alabama.

One thought on “Good Beginnings–Mama K and Her Kin, Part I”