Had a fabulous day! I had bought croissants at the Tesco’s across the street yesterday. They tasted great with my morning coffee. The hotel coffee service is a bit different than in America because the main bevrage of choice is tea rather than coffee, so all the hotels have a little electric kettle and a tin (can) of teabags and instant coffee. I had been drinking tea, but today I decided to have coffee and, boy, that was the best instant coffee I ever had. I ate a few of the cocoa almonds I packed to give me some protein for my long hike ahead. 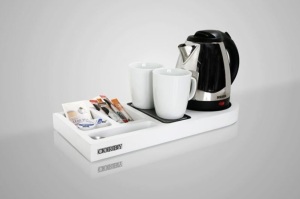 It was raining when I woke up, but by the time I did a little work and got dressed, I could see a few patches of blue. Then I checked google maps and planned my day. Since the rain had let up, I decided to go to Hyde Park as planned. I thought I might take the Underground, but I discovered that the line I needed was closed, so I decided to walk. The directions on Google maps were very good and I saw so much along the way.

I stopped briefly at the courtyard of the Royal Academy of Arts to take a look at the interesting sculptured trees by Chinese artis Ai Weiwei. The trees, made of various pieces of driftwood bolted together, represent the ethnic diversity of China according to the academy’s website. I was also interested to see that the astronomical society and geograpical society are also housed around the same courtyard. 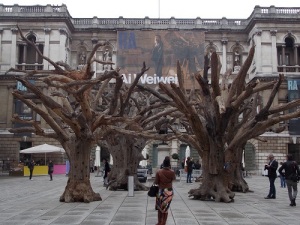 I continued my walk and found myself eventually on Oxford Street, the longest stretch of my walk. I was stopped by a young woman collecting money for a group called Oxfam that helps communities in developing countries have access to clean water. Here is the website adress: http://www.oxfam.org.uk. We talked quite a while, and as she did I was reminded forceably of the tradition of reform and charitable spirit that weaves its way throughout British history and literature. After I said goodbye to Georgia and continued walking along, the sun kept peeking out from the clouds and by the time I got to Hyde Park, the sun came out. To get to the park I passed through the impressive Marble Arch. Then into the park! 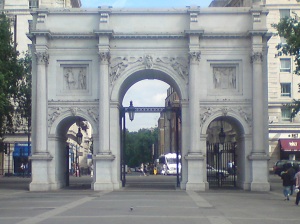 I love Hyde Park, and I just saw a little of it. I took many pictures and walked to the lake. There is a little restaurant right by the lake and it was warm enough to sit at an outside table. I have been so good and exercised so much that I treated myself to fish and chips and a half pint of beer. I thoroughly enjoyed it. Then I walked it off by walking through Picadilly Circus where the famous statue of Wellington is, along with other war memorials. I kept walking to Leicester Square where I’ve been before. 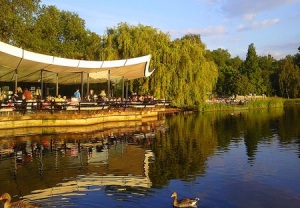 The Serpentine Bar and Kitchen where I ate some great fish and chips.

I decided to watch another movie. This time I watched Spectre, the new James Bond flick, on the big, big screen at the Odeon Theatre that is famous for its premiers. In fact, Spectre had premiered there on Sunday when my friend and I saw The Suffaragette. It was a totally outrageous movie but I do love a good action flick. When I came out there was another premiere going on at another theater, but I couldn’t get close enough to see much, but I think I saw the top of Bradley Cooper’s head! 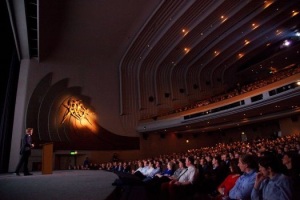 I took the Underground back and now I am once again safe in my room, watching, what else, Harry Potter! Tomorrow I plan to go to the British Museum and maybe a little museum called the Soane, which is close to the Thames. Then, I have tickets to see Imelda Staunton in Gypsy, my last big show! Many of you will recognize Staunton as Dolores Umbrage in Harry Potter. I’m very excited to see her as Rose in Gypsy. Looking forward to my last day in LONDON.