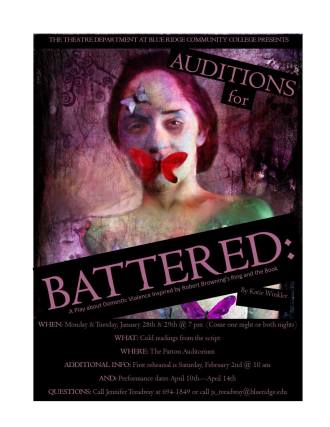 Yesterday, we filmed some of the flashback scenes for my newest play, Battered: A Play about Domestic Violence Inspired by Robert Browning’s “The Ring and the Book.” If you are near Asheville, NC, in April, then I hope you will try to make it.

Here is more information about the production:

April 11-14, the Theatre Department at Blue Ridge Community College in Flat Rock, North Carolina, presents the world premiere of English faculty member Katie Winkler’s drama, Battered: A Play about Domestic Violence Inspired by Robert Browning’s “The Ring and the Book.” A story within a story within a story, the play takes place in a small theater during the read-through of a new play by a young woman, Julia, who has escaped from a violent relationship with her intimate partner.

Julia has chosen to write an adaptation of the Victorian poet Robert Browning’s masterpiece, The Ring and the Book, drawn not only to the long narrative poem’s subject of the real-life murder of Pompilia Comparini by her husband Guido Franceschini, but also to the story of the great love between Robert Browning and Elizabeth Barrett. As the main character in this play within a play endures the increasing violence of her tyrannical husband’s abuse, Julia begins to relive her own nightmare.

As in past productions, including last season’s Stories from the Table by communications instructor Joshua Bledsoe, Battered is a collaborative effort, involving Director Jennifer Treadway and the author, as well as Blue Ridge students and community members. The desire is to raise awareness about the ongoing issue of domestic violence and also celebrate the enduring work of two of the greatest English poets of all time.

Author Katie Winkler has taught English composition and British literature as an adjunct and full-time professor for over 23 years at the college. Previous productions of her work include the musical A Carolina Story, a literary adaptation of Mary Shelley’s Frankenstein, and the one-act comedy Green Room. She is an active member of the Dramatists Guild of America and is a recently named trustee on the board of the North Carolina Writers’ Network.

Starring as the playwright Julia is well-known area actor Natalie Broadway, who has performed in several productions at Blue Ridge, including August: Osage County, The Taming of the Shrew, and Les liaisons dangereuses, among others. She also served as artist-in-residence at the college, performing the lead role in Bertolt Brecht’s Mother Courage and her Children. Other cast and crew members include theater students, as well as students outside of the department, alumni, and community members.

Battered will be presented April 11-14 in the Patton Auditorium of the Henderson County campus. Other performance sites will be announced soon. Admission for students, faculty and staff is $5. General Admission is $7. Contact the Blue Ridge Community College Theatre Department for more information or to make reservations.  js_treadway@blueridge.edu.

Busy times for Mrs. Winkler! Besides grading like mad to catch up from unexpected eye surgery followed by a bad head cold AND putting the finishing touches on the play, I am currently putting together my newest edition of Teach. Write.: A Writing Teachers’ Literary Journal. I am excited about this edition’s contributions and think you will be, too! Stay tuned!