A little while ago, I had a worse than usual incident with in-class cell phone usage. It was towards the end of class near the end of a semester when I was so distracted by a student’s texting that I asked him to put the phone away. He put it face down on the table in front of him. Less than a minute later, he was on the phone again. I asked him to put it away again. He put it face down on the table. I asked him to put it out of sight. He put it in his lap. I asked him to totally put it away, and he completely lost it, saying things I knew he would soon regret. (To his credit, he emailed me that evening to apologize.) I asked the student to leave for the day. He left, but reluctantly, and only after saying a few more regrettable things.

I have my own regrets: that I didn’t have a more clear-cut policy in the beginning of the semester, that I have been too loosey-goosey with inappropriate use of technology in my class. So, I have been drafting my new cell phone policy. It’s pretty hard core, at least compared to my previous policy. I know. I know. Some of you will think what a total marshmallow I must be, but like I told one of my teacher friends long ago, “You know what happens when a marshmallow sits on the shelf too long? It gets hard as a rock!”

Cell Phone Usage: Cell phone usage has become a major problem in my classes, distracting to the students who are texting or surfing, to those around them, and to me, making it harder for me to teach effectively. If I must consistently stop the class to discipline students on cell phones, I waste instructional time and risk embarrassing or angering the cell phone user as well as the rest of the students.

Therefore, I am instituting a stricter policy this year. Once class begins, phones are to be silenced and kept totally out of sight. Any student having a visible cell phone, holding, or using one during class may likely be asked to leave for the day, even if it is the first offense. If I am consistently having to ask any student to leave the class for violation of the cell phone policy, then I may submit a Behavioral Assessment Form to Student Services as described in the student handbook, which could result in further discipline, perhaps even suspension from the class.

What do you think?

I would love to hear from you. I have tried so many different things and nothing seems to work. 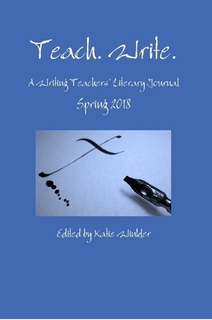 It’s not too late to submit to the Fall/Winter 2018 edition of my online literary journal for writing teachers–Teach. Write. Submissions are open until August 1. Look here for submission guidelines.

2 thoughts on “Trapped in a Cell”